Born to a teacher mum and a hardworking dad who’d both emigrated from India in the 1970s, Nilesh was, like many others of the 1980s East End generation, surrounded by the sounds and smells of the subcontinent that somehow merged seamlessly with the rapidly emerging Canary Wharf and the birth of MTV.

Fondly remembering a happy childhood of playing on the street and a loving home, it isn’t lost on Nilesh that it was also a time of blatant racism, which his family mainly managed to avoid. Despite the challenges, his parents raised two children who both excelled academically – his sister is a chemist and Nilesh is a King’s College alumnus. In fact, he was even a contestant on Countdown.

So, what made this general knowledge aficionado turn to school leadership? After graduating with a biological science degree, Nilesh became an Auditor and a qualified Chartered Accountant. But Nilesh knew he wanted to make more of a positive impact, so he applied his trade in the voluntary sector. The corporate environment, coupled with bureaucratic hurdles for even the smallest change, soon took their toll, so, in 2012 he began his journey into education to influence positive decisions that impacted families for years to come. 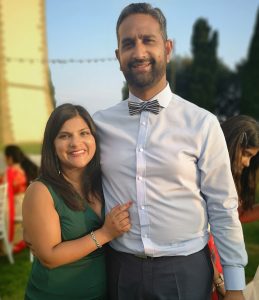 In hindsight, he should have seen this change coming because not only does he name check King’s Different Seasons, Shakespeare’s Hamlet, and Trescothick’s Come Back To Me as his favoured reads, his ideal dinner guests are also champions of empowerment through education:e Mahatma Gandhi, Barack and Michelle Obama, and Prince.

Throughout his career, Nilesh has seen the impact of funding cuts, changes to school structures, and education used as a political football, but his will and dedication remains unshakeable. He’s currently working diligently to make sure his school is doing everything it can to bring education into the 21st Century by modernising systems and processes to help staff and families alike.

We’ll let Nilesh tell you why he chose NAHT:

“As School Business Manager, it’s important I’m engaged with and surrounded by likeminded colleagues, not least because of the current political climate. So, after careful consideration and recommendations from other leaders, I happily joined. My goal is for everyone to see NAHT as the natural home of SBM colleagues.”

Plus, he’s also an advocate of NAHT’s CPD offerings:

“At the Leading on SEND across all schools event I was inspired listening to those who’ve been through the system and, in some cases, failed by it, and how collectively they fought for improvements to funding and educated the decision makers at national level.”

If you’ve been inspired by our member case studies on The Hub, you can find out more about becoming a member of NAHT today.