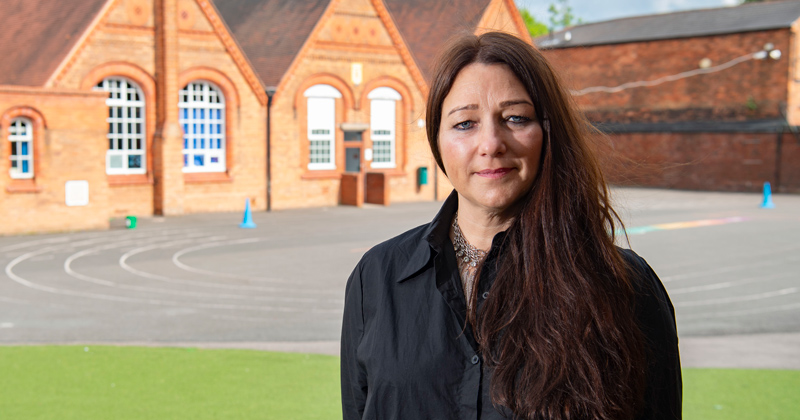 Growing up in home filled with music, Methodists teachings, a Head Teacher father, and Aunty Margaret’s love of Shakespeare, Sarah Hewitt-Clarkson was well prepared for a life fighting inequality wherever she saw it.

A born and bred Brummie, Sarah was your average bugle-playing, church band member busting out a tune… and her lungs, especially when it was to raise much needed funds for church charities including Hamlin Fistula Hospital. As Ethiopia’s only women’s hospital focusing on surgery to repair damage from pregnancy and birth, this is a vital lifeline for the most vulnerable in one of the poorest countries in the world. Knowing so much about such cruel unfairness from an early age coupled with her inquisitive nature Sarah started looking for answers always knowing teaching is the end goal. First came theology at college, followed by a philosophy degree, and then a PGCE. The endless possibilities of exploration, understanding the human condition, respecting divergent views, and not being afraid of the unknown allowed this future leader to investigate, develop, and strengthen her belief that only through equality can society truly survive. Little did she know it’d be these exact skills she’d have to call upon to protect her pupils and staff, and stand up to one of the most vocal, legally challenged, and nationally reported protests around a primary school in recent times.

It’s been a long road to Anderton Primary, but one that’s littered with standout moments. Powered by her mission to nurture rounded, loved children and witness them become fearless champions of respect and equality Sarah became a Teacher Governor as soon as she entered her first school. Then a middle leader within five years, and was trusted with senior leadership roles very soon after that. It wasn’t just the schools that noticed her special talents, but also OFSTED. In fact, one inspector’s feedback to a Head Teacher noted: “don’t hold her back her even if it means letting her go. She’s meant to be a leader.”

And held back she wasn’t. Hell bent on transforming young lives Sarah combined her love of Shakespeare (hasn’t missed an RSC production in twenty two years. Wow!) with her love of teaching she set about introducing the plays to all aspects of learning. Seeing very quickly their transformative powers: from livestreaming plays, to visiting the utterly absorbing Globe Theatre, to trips to Stratford Upon Avon. The beauty of Shakespeare’s prose and the meaning behind his most celebrated works isn’t lost on Sarah or her school, which is now a Royal Shakespeare Associate. Not one to rest on her laurels, Sarah’s putting her school’s values – relationship, determination, ability to sparkle – to good use. Working with Birmingham Children’s hospital, Children In Need, NSPCC, and other worthwhile causes.

Add to this the roller-coaster start to 2019 and you have one determined leader. The magnitude of what Sarah and her team have had to deal with: whirlwind of loud, aggressive, intimidating protests directly outside her school has been unprecedented. However, not one to be silenced, and with NAHT’s help, she took the fight all the way to the High Court, which resulted in the setting up of an exclusion zone to allow pupils and staff safe passage.

So, alongside having one of the most demanding roles in Birmingham, bringing up her daughters, continuing her father’s legacy as the Trustee of Hamlin Fistula Hospital, Sarah still finds time to mow the lawn, tend to her peonies, visit the two independent cinemas in Birmingham, and she’s still contemplating getting a puppy. Phew!

As usual we’ll let Sarah tell you why she chose NAHT: “I was seeking a union of strength and conviction. NAHT provided that, especially in the guise of Rob Kelsall. He was, and still is, immensely knowledgeable, tenacious, and supportive. There’s real solidarity too, which is on full display, especially in times of need. On top of that I’ve made many friends from all over the UK.”